My favorite resources related to procedural geometry, graphics, and math.

Hey y’all! Today, I have a quick tutorial on how to create the highlight effect featured in the gif above. I was inspired by artworks like this one by Loish which have strong rim highlights.

If you’re familiar with this tutorial on how to create a basic outline, then this technique will be super easy! However, that’s certainly not required reading 🙂

For your reference, here’s the link to the final code for the highlight shader. It also includes some custom diffuse lighting from this tutorial, but you really only need to look at the pass labeled “outline pass”!

On with the tutorial!

Basically, what we’re going to do is add a second pass to our shader that scales the model, draws only the back faces, and draws the outline color (white) without any lighting or texturing applied. This will cause our scaled ‘outline’ mesh to appear behind our lit & textured mesh, and poke out between any areas where the mesh overlaps itself. Let’s look at exactly how to do that.

In addition to whatever regular lighting/texturing/coloring pass you have to draw your basic model, we’ll need to add a second pass just to draw the outline. (If you’re familiar with the basic outline tutorial, note that you don’t need to do the stencil buffer stuff for this effect.)

We also need to add the directive Cull Front to this pass. This means that our outline pass will only draw the back faces of our model.

We’re only going to return our tuned highlight color in the fragment shader, as we’re not going to apply any lighting or texturing to this highlight.

Here’s what the skeleton of what this pass looks like. Don’t forget to add the properties to your Properties block at the beginning of the shader!

At this point, you won’t actually see your outline just yet. This is because it’s drawing behind your lit model, and they’re the exact same size.
To start experimenting with this outline, let’s first scale the vertices so that we can see it! Specifically, in the vertex shader, let’s scale the vertices along the normal direction so that the scaling preserves the shape of the model.

After tuning _HighlightScale, you should now see an outline of even thickness all around your model, like this:

In my opinion, this is already a pretty cool effect. You could leave it like this if you want to!

Now, to make this outline reactive to the direction of the light source, we want to make its thickness depend on the angle between the surface normal and the light source.

To do this, we first need to get the normalized light direction and normal direction.

We then get the dot product of the light direction and normal direction, which tells us about the angle between the two directions. The smaller the angle between the two- the more the normal is pointing towards the light- the higher the value of lightDot. We also call saturate on this product to clamp the value between 0-1, as any values of the dot product below 0 should just be 0 anyway, as those values are facing away from the light.

Then, we multiply our highlight scale by the dot product value. This will scale our highlight thickness based on the angle between the light and normal direction!

Ta-daaa! Your outline should now be scaling so that areas facing the light have a thicker outline, and areas facing away from the light are thin or have no outline at all. It should look something like this: 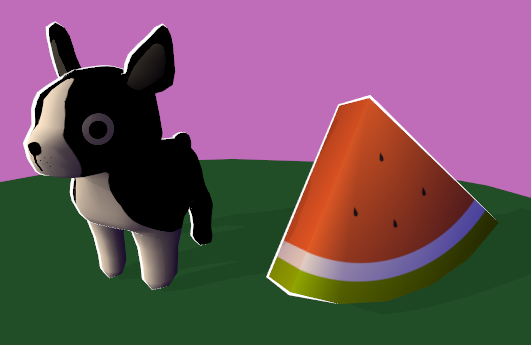 Congrats, you finished the tutorial! I hope you got some inspiration about using highlight or outline passes in a shader. If you wanted to, you could change the color of this highlight, or maybe even base the color on the ambient or directional light source… :0

If you enjoyed this, be sure to check out one of my many other outline (and other shader) tutorials.

If y’all have any questions about writing shaders in Unity, I’m happy to share as much as I know. I’m not an expert, but I’m always willing to help other indie devs 🙂 And do give me feedback about the tutorials, I love hearing from y’all!